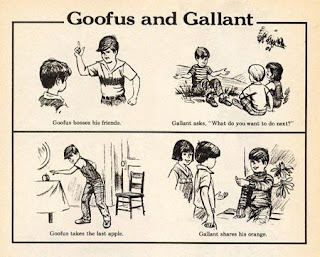 Can we just acknowledge the fact that the Voltaggio brothers have pretty much hijacked Top Chef? We no longer tune in to see whose sauce is unsalted, whose fish needs more acid, and whose foam is flat. It’s all about Goofus and Gallant, playing out their little domestic psychodrama for all the world to see.

And I love it.

“When we were kids, I was the instigator and Bryan was always trying to look out for everybody,” says Goofus, in a rare moment of self reflection.

Crazy new Quickfire challenge: The blindfolded tag team hootenanny. The cheftestants are blindfolded, split into two teams and . . . waterboarded. No, just kidding. In fact, they have to make a tag team dish without consulting with each other or even knowing what ingredients will be involved. The teams are Eli, Robin, Goofus, and Gallant vs. Jen, Kevin, Laurine, and Michael I.

So team Kevin and co. win—despite the fact that Jen thought they were cooking with trout, when, in fact, they were cooking with black cod. They are giving the option of taking 10 grand and splitting it four ways, or taking home 10 grand each if they win the Elimination Challenge. Feeling cocky after their big win (we can win without even knowing what protein we’re using!) they go for the gusto. Who can blame them?

In case you hadn't guessed, it’s Restaurant Week and Top Chef has finally realized that this is not Top Design and they’ve gotten rid of the annoying “decorator’s showcase” portion of the challenge. (If I saw one more chef standing in Pier One holding a scented candle, I was going to scream.)

Another good wrinkle: The front-of-the-house person has to be responsible for at least one dish.

Laurine, who says she has lots of experience with FOTH (I don’t even know if that’s an actual anagram, but I’m going with it) offers to fall on that sword for team Mission.

Eli—because who doesn’t want to be seated by an ill-tempered troll before they embark on a culinary voyage?—takes the FOTH for team ReVolt.

Yes, you read that right. The name of the Voltaggio brother’s team is ReVolt (it’s the Volt boys, plus Robin and Eli, get it?)

“Won’t that make people think of the word revolting?” Robin says. She is quickly patted on the head and ignored.

Just for the record, here are the top 5 restaurant names that would still be better than ReVolt

So the plan for team Mission is to not do dessert, because dessert has been the death of many a team on the restaurant challenge.
(This is the logical equivalent of skipping the math portion of the SATs, because, you know, math is hard.)

The plan for team ReVolt is to have Robin do as little as possible. But that’s okay, she and Goofus are strategizing her little pear tart and she raises her hand for a high five and I think, “he’s just going to leave her hanging there. . .a high five dangling in the wind” and he actually, albeit diffidently, slaps her back. And it is the happiest moment of Robin’s life. (And possibly mine.)

Meanwhile, the Voltaggio boys are fighting about Gallant’s chocolate ganache.
“Can you execute your ganache without it being grainy?” asks Goofus.
“Yes,” Gallant says, clearly and understandably annoyed
“Don’t get angry,” barks Goofus.

And that, boys and girls, is a little microcosm of Goofus’ leadership style. He says something highly inflammatory or offensive to someone and, when that person gets appropriately defensive, he says, “Don’t get angry.” (Or in the case of his skirmish with Robin in the kitchen, he will give a twitching, foaming-at-the-mouth: “Relax! Relax! Relax!” Because nothing is more relaxing than a man with veins bulging in his neck screaming at you to relax.)

As Goofus puts it himself, “Some feelings are going to hurt. That’s not my fault.”

It’s clear right out of the gate that team ReVolt have their act together and Team Mission don’t. For starters, Eli is pretty good at the front of the house, even if his presence is a little too intense for me. (Both he and Goofus should seriously look into yoga.)

Of course, the Volt boys are brilliant, Eli is not half bad, and even Robin comes through with her pear tart.
And, in all fairness, obnoxious as Goofus may be, he ran a tight kitchen. While team Mission was “in the weeds,” team ReVolt was in a pretty good groove.

Meanwhile, it would appear that the only thing team Mission got right was their name. First of all, if flop sweating is a great quality for FOTH, then Laurine is your woman. Second, the judges audibly gasped—yes, gasped—when they found out that Mission had no dessert. Third, Padma asked for salt. (The news of this snaked ominously through the restaurant—Padma needs salt, Padma needs salt—until it reached a horrified Michael I in the kitchen.) Finally, Jen’s fish was mushy and I’m pretty sure Kevin/Laurine’s lamb was still alive.
Baaaaad times.

And then Goofus is rewarded for being a dick and gets the 10 grand. And then he does something surprising and sweet—he splits the money among his teammates.

It’s hard to say what annoys Gallant more: The fact that his kid brother won the challenge, or the fact that he went and did something kind of nice. I mean, how annoying was that?

“You can keep mine,” says Gallant huffily.
“Why are you pissed?” asks Goofus.
“I’m. Not. Pissed,” Gallant replies through gritted teeth. “I’m very happy about this whole situation.”

Later, Gallant explains to the camera, “I’m tired of his unprofessional behavior being rewarded.” We hear ya, buddy.

And with that, it has suddenly occurred to me that Goofus could actually win this thing. I had always thought that Kevin and Gallant were 1 and 1A with Goofus and Jen completing the Top 4. But after last night’s show, I don’t know. Gallant will always be exceptionally good. But Goofus—bratty, bossy, risk-taking, reckless, egomaniacal Goofus—has the potential to be great. And it’s killing Gallant.

“Does anyone want to cuddle before I go home?” sighs Jen. Awww, remember when she was like a little soup nazi? Those days are over.

“Your sauce was broken,” the judges tell her.
“I’m feeling a little broken right now,” she replies.

But worry not. Jen ain’t going nowhere. And neither are Kevin and Michael I.
Laurine was yet another victim of the FOTH syndrome. My advice for future cheftestants? When asked to be the maitre-d’, make sure you maitre-don’t.

Posted by maxthegirl at 8:25 AM

Max, you had me both loling and roflmao.

I hate to admit how hooked I am on a tv show but I was glued to the screen for this one. The surprise for me was how Jen's team fell apart. I did not see that coming, not with Teddy Bear Kevin on her side. Jen is starting to come across to me as a classic second banana - suck up to the boss man and yell at all those under your rank. "I make boys cry" indeed.

How about Kevin's statement about Gallant and Goofus always fighting? It must be even more intense then what we are seeing for Kevin to complain about it. Bryan really did have to jump in and hold that kitchen together so I kind of get his pissiness at Goofus winning but boy, he was pissy.

Thanks for the space to sound off, Max. You're the best recapper on the net and I read them all since I'm so hooked on this show. You're good with PR too, but since I have nothing good to say about that show this year, I've stopped commenting on it. :)

Thanks cjcat! Yeah, they should really consider a Top Chef: After Hours or somethin' ...

Yes, I agree with cjcat--ytbrotn. (That sounds like some kind of Russian baked good, doesn't it?) Hilarious as always. I still can't get behind Robin, though, and felt a twinge of glee when Goofus drew out that final Reeee . . . laaaaax.

That relax was kind of scary, wasn't it? I thought the dude was going to stroke out.

I'm over the Robin drama. No matter who is at fault, she's not going to make it into the top. Mostly I'm just pulling hard for my hometown boy, Kevin. Go, Redbeard!

I loved your recap! But I utterly despise this fucking hot mess of a season. There are the 4-5 impeccable chefs who barely make a mistake (Mike is at the bottom of that wrong, since he's only won a Quickfire). But nobody really has a personality. Jennifer and Kevin come closest to being the most enjoyable, and I'm rooting for Jennifer to pull an upset win because she's been one of the most consistent and after last season screwed over all of the women, it's time for a woman to win again. But since Ash left, there's little funny. Jennifer can be amusing, quietly, and Mike grew on me, but ugh. No funny, just douchey. Give me people I actually WANT to root for!

Like the commenter above, the Robin drama is so manufactured. Same thing every week. This brothers spat is being milked, too. They better cast more likable people next year. It's stupid to watch a show and only like the people because the judges reward them; we need more people like--well, like Season 4 <3. Best fucking season ever. Stephanie, Antonia, Andrew, Richard--what a cast! Even Lisa and Spike had good moments. Take a lesson, TC casting morons.

BOY, did you EVER nail BrotherMichael on the M.O.! I couldn't really get a handle on how it is he so ably gets under people's skin, but that really is the method.

And STILL giggling over your other suggested names for REVolt. Ha!

I think Brother Mike gets a bad rap from the editing. In fact, both Laurine and Ash in interviews have said they really enjoy him, and that he's very sarcastic and even makes fun of himself for being cocky. Also, the thing about asking his brother if he can execute the ganache without it being grainy...I don't see how that's offensive when that was the dish that put Bryan in the bottom of a quickfire a couple episodes earlier. He just wanted to ensure everything was going to be perfect, and as far as we saw, he handled a tight kitchen that produced great food.

It has to do with the fact that he confronts people in a condescending way, then manipulates control by insinuating that THEY'RE the ones getting hot-headed.

He would be *amazing* on Survivor <3.

This is how I blog roll

maxthegirl
Hi, I'm Max Weiss. You might know me from WBAL radio or WBAL TV. Maybe you know me from my days on Max and Mike on the Movies or as managing editor of Baltimore magazine. Maybe you don't know me at all—and prefer it that way. This blog will be sort of a clearing house of movie reviews, pop culture musings, deep thoughts, and reality TV recaps. Oh and pictures of my dog. Lots and lots of pictures of my dog.